Throughout the week, I look for inspiration on what to write about for my column. Sometimes I know ahead of time that something is approaching and I count on writing about that, sometimes I write the day it is due.

Recently, I talked to a couple of readers who commented to me about my column and of course, their feedback was happily accepted. One gentleman told me that he always reads what I write, but it doesn’t much apply to his way of life. Another gentleman mentioned that without children, I wouldn’t have much to write about. Both of these gentlemen were right, I often have a narrow subject base because I am a stay-at-home mommy. But, as a mother of two and a pseudo step-mom of two, I have to imagine that most of my days, and the life lessons I have learned from these busy days, do in fact resemble those of others.

Today, I dropped Kendall off at school and had a list of errands to run before picking her up. Collins and I got in and out of the car more than a half a dozen times. Each time, getting her back in her seat was more difficult.

She wanted to climb through the van and check stuff out, with each stop taking a little longer than the last. Finally, after picking Kendall up, Collins broke down. She didn’t want to get in and out of her seat anymore. I don’t blame her, it was a long morning. However, we still needed to make a trip to Walmart before heading home. I should have known before we went that it would be a disaster.

Our shopping trip started off ok, the girls were giggling and playing peekaboo in the aisles. But when I wouldn’t let Collins take her shoes off to try on a pair of glittery flip flops, the screaming started and it didn’t stop.

I have read where mommies will abandon their carts, or their lunches, so that they can take their children to the car. I could have done that, I suppose. The way I see it is that I would still need to go back to Walmart and I still needed to get the stuff in the cart, so it seemed silly to abandon it, right?

Today, I was THAT mom. The one with the screaming child. I watched as other children plugged their ears. I looked at other customers and Walmart employees as they stared at me; some smiling as if they understood, some with looks of disbelief – like Collins must have been the first child ever to throw a fit at the store.

A friend of mine, who happens also to work at Walmart, came to help me as I desperately tried to get Collins’s shoes back on her without her dropping buckets of paint on herself; meanwhile, prying her fingers off of the handful of hair she had grabbed onto in her fight to express herself. At that point, I decided to pick out paint later.

Any mommy or daddy can probably agree, a screaming child is one thing, but YOUR screaming child sends something through you, almost electric, and you are unable to focus on anything else until it stops.

So we made our way to the checkout. One man tried to calm Collins down by offering her his pack of gum – pointing out to her that it smelled like mint. She screamed louder, he bid farewell with a “good luck.”

The next lady through the line, a much older woman, looked at me and said, “I had two terrible boys, but they were never THAT bad.” To which I replied, “Well that’s good for you.” She didn’t stop there, she continued by telling Collins – my obviously tired and emotional child – “Nice young ladies do not act that way”, followed by a “Wow! She really has a temper.”

What that lady – that stranger – didn’t know about my beautiful Collins is that this is the first time she had ever acted that way at the store. She didn’t know that it was completely uncharacteristic or that she had a long morning. She didn’t know anything about us at all, but that did not stop her from quickly judging us and the situation.

A fellow mom. That woman also has no idea that when I sat in my car – Collins still screaming – and started crying, it wasn’t because of Collins. It was because of her that I cried. I wish I would have told her that her words hurt, or that she was wrong about her judgement. I wish I would have stood up for myself and for Collins, and for other mommies. I just didn’t have the energy to argue her malevolent behavior.

I sit here at home writing this as Collins sleeps (because she is tired), relishing in the peace and quiet. Reflecting back on the day, I am no longer angry with the woman from the store. Instead, I will choose to be more compassionate and empathic the next time I hear a screaming child.

“If you can’t say something nice, don’t say nothin’ at all.” –Thumper from the movie Bambi

2 thoughts on “If you can’t say something nice…” 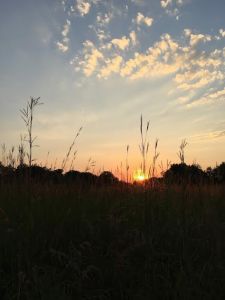